Global Ehsan Relief selects only reputable international relief agencies with many years of experience on the ground to work with. We place value on high integrity, transparency and with emphasis on providing sustainable development solutions relating to shelter, education, health, and spiritual well being for the poor and needy all over the world.

We are proud to work with these tireless people: Islamic Help is a UK registered charity and international NGO established in 2003 by a group of young people determined to make a difference to the lives of those afflicted by poverty and suffering. Enthusiastic, dedicated and visionary the group took their ideas to older and wiser members of the community and were pleased to get their support and to launch an initiative that a few years later would become the globally recognised charity that is Islamic Help.

In recent years, Islamic Help has continued providing emergency relief following major disasters and has delivered humanitarian aid to hundreds of thousands of refugees and displaced as a result of conflicts like Gaza, the Central African Republic and Syria. 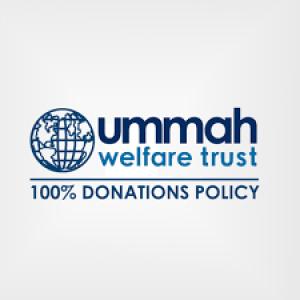 Ummah Welfare Trust is a UK-based international relief and development charity established in 2001. Inspired by the Islamic teachings of empathy, generosity and selflessness, the trust aims to alleviate poverty and suffering across the world.

The rights of those who are neglected and oppressed are fulfilled by providing sustainable development solutions relating to shelter, education, health, and spiritual wellbeing.

Our Current Projects With UWT: A UK based organisation, supporting over 20,000 orphans and their families in 14 countries. We support those who cannot provide for themselves, delivering sustainable, long-term solutions to those in need. We offer regular food parcels, cover fees for education and healthcare and support orphanages abroad.